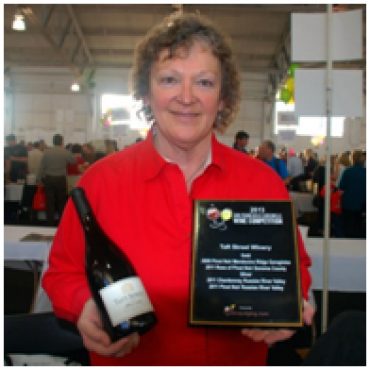 After graduating from Sonoma State University with a degree in Biology and Chemistry, Evelyn heeded the advice of friends and took a temporary harvest job at Chateau St. Jean. Over 30 years later she remains in the wine business as the winemaker at Taft Street Winery, focusing on Russian River wines.

The initial harvest job at Chateau St. Jean was followed by a position at the winery as a laboratory technician. Evelyn then completed several enology and viticulture courses at Santa Rosa College before accepting a position at Lyeth Winery in Geyserville, where she was eventually promoted to assistant winemaker. In 1992, she was offered the position of laboratory enologist at Clos du Bois Wines, where she spent 11 years and rose to the position of winemaker.

She joined Delicato Family Vineyards in 2004 as its winemaker and was involved in the production of all white wines produced there. She joined Taft Street Winery in 2007, where she crafts Chardonnay, Pinot Noir, Sauvignon Blanc, Pinot Gris, Rose of Pinot Noir, among other varietals.

Evelyn is a member of the American Society of Enology and Viticulture and is involved in a tasting group that includes many of Napa and Sonoma County’s top winemakers. Some of Evelyn’s hobbies include cooking, gardening, and traveling worldwide with her husband, who also is a wine industry professional.